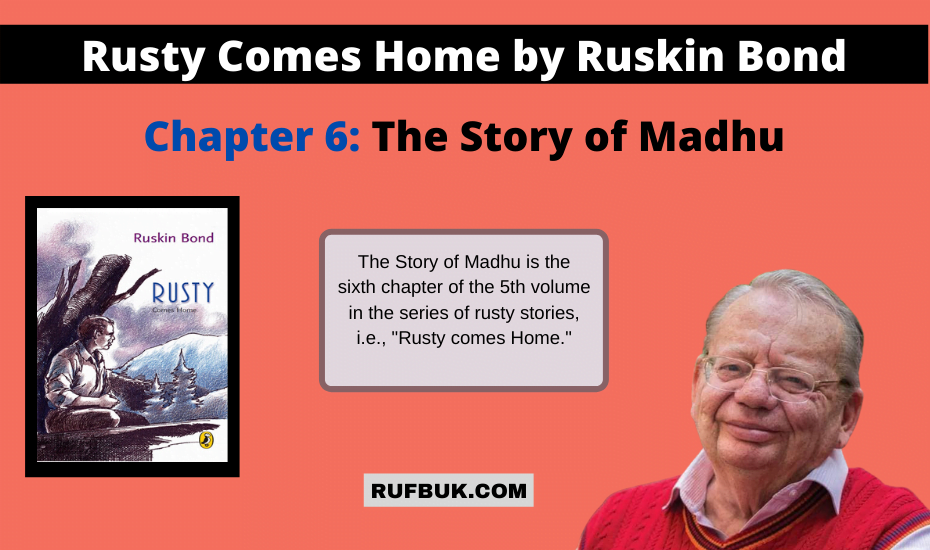 Introduction of The Story of Madhu

The Story of Madhu is the sixth chapter of the 5th volume in the series of rusty stories, i.e., “Rusty comes Home.”

Madhu is a little girl about the age of 19 when Rusty met her for the first time. Every morning she used to chase butterflies, striking squirrels and mynahs; Her voice was very sweet. She was a sweet little girl to whom Rusty was deeply attached. The attachment and bonding that Rusty and Madhu had been in danger after Madhu turned sick. Rusty had to lose Madhu which led Rusty to a lonely garden. No one to sing and run in the garden.

What happened to Madhu? Read the full article to know.

Summary of The Story of Madhu

One morning, while Rusty was sitting beneath the mango tree, he saw a young girl of about nine. She was wearing torn clothes. In a few days, an acquaintance has been formed for Rusty. Rusty began to take the girl’s presence for granted.

One day, Rusty called her to him and asked for her name. “Madhu”, said the girl. She told Rusty that she was living with her hundred years old grandmother. But later Rusty came to know that the old lady was not her grandmother but a childless woman who had found the baby girl on the banks of the tank. Madhu’s real parentage was unknown.

As years passed by, Rusty sometimes, but not often, used to give her a new dress or a toy. Now, as Madhu was very much known to Rusty, he thought to take some time and teach Madhu how to read and write. Rusty asked a local teacher to give Madhu lessons in the garden for an hour every day.

In few weeks, Madhu was surprising them with her capacity for absorbing knowledge. She always came to Rusty to repeat the lesson of the day and pestered him with questions on a variety of subjects like, “How big is the world?”, “Are the stars really like our world?”, “Are they the sons and daughters of the sun and the moon?”. Rusty’s interest in Madhu deepened and Rusty’s life became imbued with a new purpose.

Three years glided away imperceptibly, and at the age of thirteen, Madhu was on the verge of blossoming into a woman. Rusty began to feel a certain responsibility towards her. Rusty knew, to a child so pretty to live almost alone and unprotected, is dangerous. And is a censorious society she would be made to suffer if she spent too much time in Rusty’s company.

Madhu could see no need for any separation but Rusty decided to send her to a mission school in the next district, where Rusty could visit her from time to time. At first, Madhu hesitated and made an urge to stay with Rusty and learn from him and the Master. But, Rusty made her understand the meaning of independent life. He promised to come and meet her often.

One day, Rusty was informed that Madhu had a fever and couldn’t leave the house. Illness was something Madhu had not known before, and for this reason, Rusty felt afraid. Rusty hurried down the path which led to the old woman’s cottage. It was a humble mud hut, the ceiling just high enough to enable Rusty to stand upright, the room dark but clean.

Madhu was lying on a string cot, exhausted by fever, her eyes closed, her long hair unkempt, one hanging small hand hanging over the side. Rusty came closer and hold her hand. She recognized Rusty’s touch and passed a smile across her face before she opened her eyes. She held on Rusty’s hand, then laid it across her cheek. By her touch Rusty could feel the warmth of her body, she was seriously ill.

In the corner laid Madhu’s little reassure. Rusty recognized among them the presents which during the past four years Rusty had given her. She had kept everything. She had given her heart, even before she was conscious of possessing one, to a stranger unworthy of the gift.

Rusty was sitting beside her. Madhu slowly and smugly asked Rusty, “What will you do now? Will you send me to school?” Rusty was filled with guilt and hopelessness. He almost felt like crying. But Rusty spoke out, “Not for a long time. First, you must get well and strong. That is all that matters.”

She didn’t seem to hear Rusty. As she knew she was dying, but she didn’t resent it happening. “Who will read to you under the tree?”, she went on. “Who will look after you?”, she asked with the solicitude of a mature woman. “You will, Madhu”, Rusty spoke out. “You’re grown up now”.

The old woman took Madhu’s hand from Rusty’s and gently laid it down. Rusty sat by the cot a little longer, and then he rose to go, all the loneliness in the world pressing upon his heart.