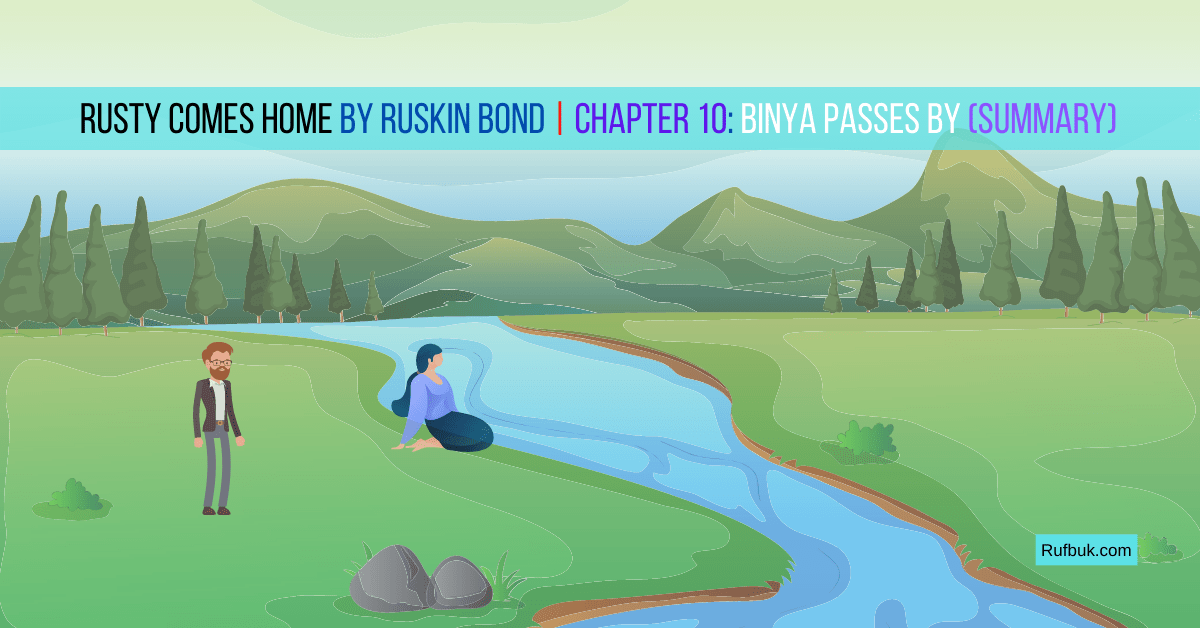 ‘Binya Passes By‘ is the tenth chapter of the book from the Rusty series, i.e., Rusty comes Home. Binya, if you think you have heard this name earlier, yes! You might have. Binya is the main character’s name in the book “The Blue Umbrella” one of the best books written by Ruskin Bond, but here, Binya is a different character, not the one from The Blue Umbrella.

Binya is a beautiful girl in her twenties. She used to sing in the hills and graze her cows some fresh and green grasses in the pine forest. Her voice is so melodious that Rusty fell in love with Binya’s voice. The story revolves around Binya. A girl from a little village near the pine forest. Here is a tale of Binya and Rusty.

Don’t Miss: The Story of Madhu by Ruskin Bond

Summary of Binya Passes By

One day, while Rusty was walking Home, he heard a girl singing along the path through the pines. It was summer in the hills, and the trees were in new leaves. The walnuts and cherries were beginning to form between the leaves. The calm and pleasant breeze was pleasing the body. The voice came clearly to his ears. The voice was young and tender. Rusty tried to follow the voice, but as Rusty Scrambled down the slope and reached the bottom, the singing stopped. Rusty was sure he heard someone singing, but, in the hills, it is always possible to be wrong. So, he walked Home.

For a week, Rusty did not leave the cottage, as the novel had to be written. Rusty describes his cottage’s view this way “The window opened on to the forest. Trees reached up to the window. Oak, maple, walnut. Higher up the hill, the pines started. And the mountains rose higher, and the trees grew stunned until they finally disappeared and only the black spirit – haunted rocks rose to meet the everlasting snow”.

There was a stream at the bottom of the hill. One morning, Rusty went down to the stream and lay down to rest on a flat rock in the shade of a wild cherry tree and watched the sun shifting through the branches. The air was very still, and already the birds were silent. The only sound came from the water running over the stony bed of the stream.

One day, Rusty was reading in his cottage. Suddenly, he heard the song again. He leaned out of the window and stared down through the trees. Rusty fell in love with the voice; he wonders that will he fall in love with the singer?

Soon after, Rusty saw a young woman was gathering bilberries on the hillside. She was fresh-faced, honey-colored. She was in her early twenties. Her lips were stained with purple juice. She smiled at Rusty and offered him some berries. Rusty took one and put it in his mouth. It had a sharp, sour taste. Rusty thanked her. She came near to Rusty and offered him some more bilberries. Her finger touched Rusty’s. The sensation was almost unique for Rusty, for it was a long time since his hand touched a woman’s.

Rusty asked her where she lives. She pointed out the remote village and said she comes here because her cows need some fresh green grasses. Rusty asks her about her age; she says twenty-two, twenty-three, I don’t know for sure. She further added her mother passed away, and her grandfather has forgotten. She asks Rusty, “Is it important to remember?”

No, it’s not important, not here, anyway. Not in the hills. To a mountain, a hundred years are as a day. She asked Rusty about his age. Rusty said about thirty-five, thirty-six, I don’t remember exactly. She says it’s better to forget!

Rusty adds that sometimes one has to fill in forms and things like that, and then one has to state one’s age. She stood up and said she has never filled a form. She has never seen one and hopes she never will. The form is just a piece of paper covered with useless information. It is all a part of human progress, Rusty added.

Then you don’t need progress. Wild bilberries are better, Rusty said. She left him without saying goodbye.

A few days later, Rusty heard the same singing coming from the water edge. He saw the same girl sitting on a rock; her feet were in the rushing water. Rusty was watching her from the banks of the stream. She pleasantly looked up, grinned, and stuck her tongue out to Rusty. ‘That’s a nice way to greet me,’ Rusty commented.

She asked Rusty if he had brought something to eat. Rusty said No, but if you want, I can pick you some berries. She said Rusty have to go to the top of the hill again to find berries. Rusty says he won’t mind if she is hungry. Rusty toiled up the hill again until he found the bilberry bushes. He stuffed his pockets with berries and returned to the stream. But she was gone with her cows.

They met again; this time, Rusty asked for her name. Binya, she said. She also asked for Rusty’s name, but Rusty said, ‘I am nobody.’ She surprisingly asked, where are you from? Rusty again said from nowhere. He laughed and said so ‘No name goes nowhere! Then you cannot come with me, because I am going home, and my grandfather will set the village dogs on you if you follow me and laughing she ran down the path.

One rainy day, Rusty describes his meet with Binya in Rusty’s words:

“Summer rain streamed down her face as she climbed the steep hill, calling the white cow home. She seemed very tiny on the windswept mountainside. A twist of hair lay flat against her forehead, and her torn blue cloth clung to her firm round thighs; I went to her with an umbrella to give her shelter. She stood with me beneath the umbrella and let my arm around her. Then she turned her face up to mine, wonderingly, and I kissed her quietly softly on the lips. Her lips tasted of raindrops and mint. She left me there, so gallant in the blistering rain”. She ran home laughing.

Another day Rusty heard her calling – ‘No-name, Mister No-name!’ Rusty saw her halfway up a cherry tree, her strong and vigorous legs pressed firmly against the bark. Rusty went near the tree and climbed the tree without much difficulty. Rusty remained standing in the fork of the tree; his face was on a level with Binya’s breast. He put his hand against her waist and kissed her on the soft inside of her arm. She did not say anything, but she took Rusty’s by his hand and helped him climb a little higher, and Rusty put his arm around her. Rusty asked Binya why she was not married. ‘I am a widow. Have been one for a long time came as an answer.

Rusty woke early while the dew was still fresh on the grass and walked down the hill to the stream. It was Rusty’s favorite place. Rusty lay down in the grass and started thinking of Binya. He was pretty sure that his attraction towards Binya is purely physical. Binya’s affinity with the forest and mountains made her special and magical. Few days passed, and Rusty did not find Binya on the hillside. Rusty went through all the pangs of frustrated love. Had she forgotten Rusty and gone elsewhere? Had they been seen together and kept at Home? Is she ill?

She had gone to her mother’s village, a hundred miles away or so, a small boy told Rusty, and so Rusty brooked; walked disconsolately through the oak tree, hardy listening to the birds. He brooded upon the trickery of time and circumstance; He felt the years were passing by, had passed by, like waves on a receding tide, leaving him washed up like a bit of debris on a lonely beach.

Then he forced himself to snap out of his melancholy. He kept away from the hillside and the forest. He buried himself in his works, tried to think objectively. But at night, he was assailed by thoughts of Binya. He could not sleep. He switched on the lights, and there she was, smiling at him from the looking glass, replacing the image of the old lady who had watched over him for so long.