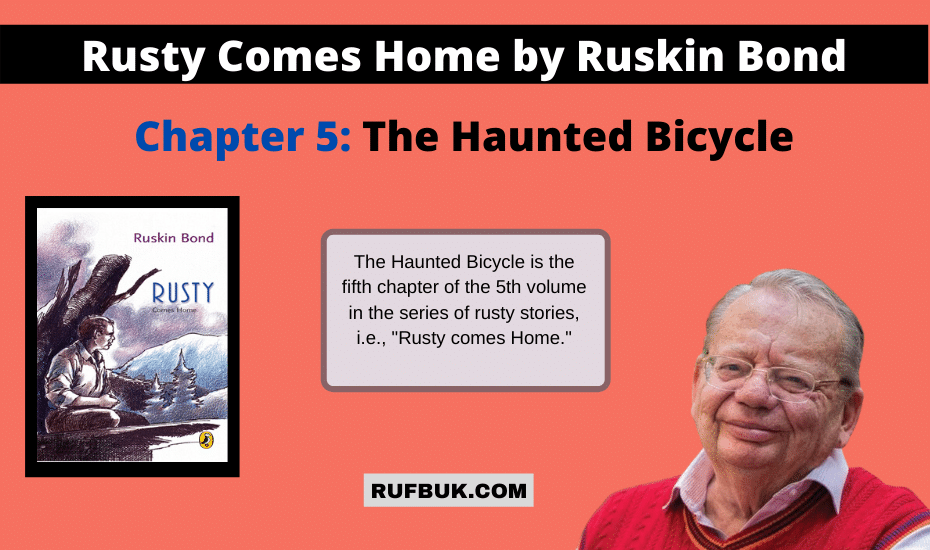 The Haunted Bicycle is the fifth chapter of the fifth volume in the series of Rusty Stories i.e. “Rusty Comes home“.

A year passed and Rusty acquired a bicycle. Rusty went into Shahganj almost every day to collect his mails, bring a newspaper, drink tea, and gossip with the tradesmen.’

One evening, when Rusty was coming back to the village. Rusty had covered a boult half the distance to the village, he was brought to a halt by a small boy who was standing in the middle of the road. Rusty got down from the bicycle and approached the boy, but the boy didn’t seem to take much notice of Rusty.

Rusty asked the kid, “What are you doing here on your own?” The boy said he was waiting for someone. Rusty precisely asked, ‘For Whom’, The boy told he was waiting for his sister. Rusty said to the boy, he hasn’t passed her on the road. She might be further ahead. Rusty asked him to come with him. The boy nodded and climbed silently on the crossbar of his cycle. It was already dark and besides. The boy kept his face turned away from Rusty.

Rusty cycled on shivering in the cold but the boy didn’t seem to feel it. They had gone far when the light from the lamp fell on the figure of another child who was standing by the side of the road. The time it was a girl. She was a little older than the boy and her hair was long and wind-swept, hiding most of her face. Rusty asked the girl to come with him. The girl climbed up on the back carrier and allowed Rusty to pedal off again. Rusty gathered that they were wary of strangers. Rusty planned to hand the children to the headman, and he could locate their parents.

The road was level, but Rusty was feeling as he was cycling uphill. he suddenly noticed that the boy’s head was much closer to his face, and the girl’s breathing was loud and heavy. Despite the cold wind, Rusty began to feel hot and suffocated.

After a while, Rusty suggested the kids take a rest as he was completely exhausted. No! cried to boy and girl together. ‘No Rest!’. Rusty was so surprised but as he was thinking of ignoring the demand of the kids and thought to stop. He noticed that the boy’s hands, which were resting on the handlebar, had grown long, black, and hairy.

Rusty’s hand shook and the bicycle wobbled about on the road. The kids shouted in unison ‘Be Careful! look where you’re going!’. Their tone now was menacing and far from childlike. Rusty took a quick glance over his shoulders and had his worst fears confirmed. The girl’s face was huge and bloated. Her legs, black and hairy, were trailing along the ground. Before Rusty could do anything, his front wheel hit a stone and the bicycle stopped over. Something hard hit on the back of his head, and then there was total darkness.

When Rusty recovered consciousness, he noticed that the moon had risen and was sparkling on the water of a stream. The children were not to be seen anywhere. He got up from the ground and began to brush the dust from his clothes. And them, hearing the sound of splashing and churning in the stream, he looked up again. Two small black buffaloes gazed at Rusty from the muddy, moonlit water.