The real story behind Archimedes Eureka Experiment and the gold crown! 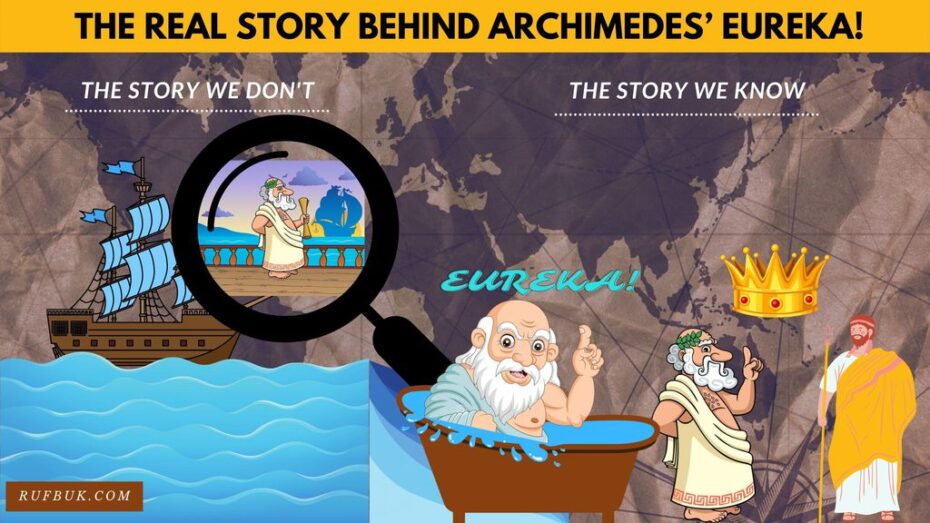 Archimedes, Born in 287 BC in the city of Syracuse, Italy. He was a great Mathematician, Physicist, Engineer, Inventor, and also Astronomer. Archimedes was a man known for his great inventions. One is the “Law of buoyancy,” also known as “Archimedes’ Principle.” His contributions in geometry revolutionized the subject and his methods that foresee the integral calculus.

Whenever we hear Archimedes’ name, we picture an old man running naked in the streets shouting “Eureka!” Eureka an ancient Greek word that means – “I’ve found it.” But what was the real story behind his such conduct? There is a story that many of us knows and which many of us don’t.

Archimedes Principle: The Story We Know

One day Archimedes was called by the King of Sicily to investigate if a Goldsmith had cheated him. The monarch said he had given a Goldsmith the precise amount of gold needed to make a Crown. However, when the crown was thoroughly prepared, the king suspected that the Goldsmith cheated and slipped some silver or other alloy into the crown, keeping some gold with himself. The king asked Archimedes to draw out a conclusion. Still, there was a catch he couldn’t do any damage to the crown.

It was a challenging task, as the precious crown could not be damaged in any way. The idea that saved Archimedes came to him in the bathtub. The bathtub was almost full. When Archimedes slipped into it, the bathtub began to overflow. Archimedes noticed that the volume of the water overflowed corresponded approximately to the volume of his own body. He concluded. The volume of bodies and even their density could be calculated by the volume of water they displaced. He realized that he could use the water method to determine mathematically whether or not the crown was of pure gold.

He observed that an object with a density lower than that of water displaced more liquid than an object with a higher density. The comparison only worked, however, if the two items were of the same weight. The amount of water was displaced in the lamen term, depending on how much of his body was immersed in the water.

This discovery thrilled him so much that he rapidly jumped out of the tub and ran through the streets naked, shouting Eureka! Eureka! He found a solution to the king’s problem.

So Archimedes took the crown and a lump of pure gold of the same weight. If the crown were made of genuine gold, it would displace the same amount of water as the lump of gold. However, the crown displaced far more water than it should have. Hence, it was proved that the crown wasn’t pure gold, but the Goldsmith has used some alloy to make the crown. This way, Archimedes discovered the “Law of buoyancy.”

The Real Story Behind Archimedes’ Eureka!

In the 3rd Century BC, Hieron, the ruler of this Sicilian city of Syracuse, chose Archimedes to supervise an exotic scale engineering design. Hieron commissioned a sailing craft that would be 50 times bigger than a usual ancient warship. He named it “The Syracusia” after his city Syracuse.

Hieron wanted to build the largest ship ever made, which was destined to be given as an offering to Egypt’s ruler Ptolemy. A warship which is also the size of a Palace. In Archimede’s day, no one had attempted anything like this. Hundreds of workers were to Labour for years on constructing the Syracusia. Syracusia was made of pine and fir from Mount Etna, ropes from hemp grown in Spain, and pitch from France.

The uppermost deck on which eight watchtowers were to endure was to be supported, not by columns but by vast wooden images of Atlas holding the world on his shoulders. On the ship’s bow, of massive catapult would be able to fire 180 pound stone and missiles for its passengers’ enjoyment.

The ship was to feature a flower-lined promenade, a private swimming pool, and a bathhouse with heated water—a library filled with books and statues, a temple to the goddess Aphrodite and a gymnasium. And to make things more difficult for argument, king Hieron intended to pack the vessel full of cargo.400 tonnes of grains, 10,000 jars of pickled fish, 74 tonnes of drinking water, and 600 tonnes of wool. It would have carried well over 1000 people on board, including 600 soldiers, and it housed twenty horses in separate stalls.

To construct something of such a vast scale only for that to sink on its maiden voyage. Well, let’s say that failure wouldn’t have been an excellent option for our communities. One day Archimedes was sitting in the bathhouse wondering how a heavy bathtub could float? When inspiration came to him – an object partially immersed in a fluid is buoyed up by force equal to the fluid’s weight displaced by the object. In other words, if 2000 tonnes of Syracusia displaced exactly 2000 tonnes of water, it would just barely flow if it displaced 4000 tonnes of water; it would float with no problem. Of course, if it only displaced 1000 tonnes of water.

This is buoyancy law, and engineers still call it the “Archimedes Principle” that explains why a large steel tanker can float as easily as a bathtub.

The Syracusia arrived in Egypt on its first and only voyage. We can only envision how Alexandria inhabitants whooped and delighted at the harbor to marvel at the appearance of this majestic floating Castle. This remarkable vessel was the “Titanic” of the ancient world.

previousWhy was Bitcoin Cryptocurrency created and Should You Invest
nextEdTech Startup India | Types, 3 Major Companies, and Role of Youth