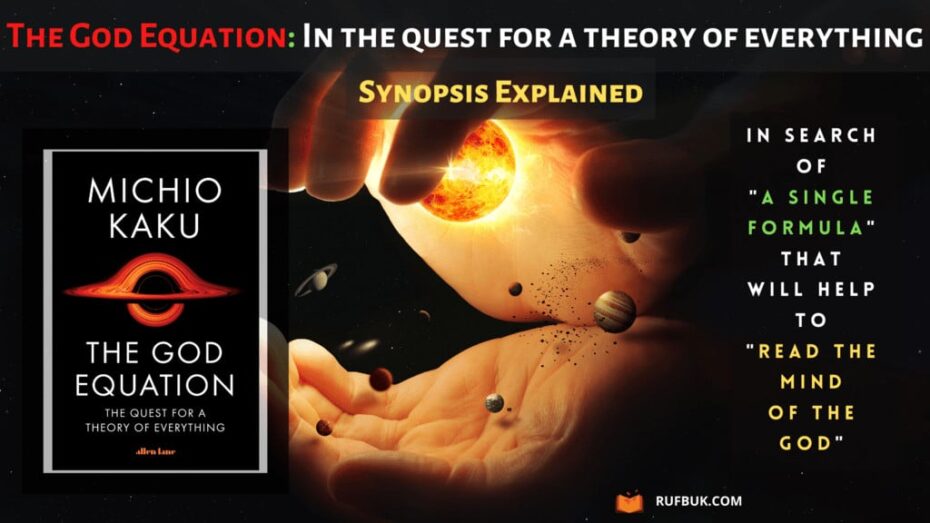 The writer of The God Equation, Dr. Michio Kaku talks about an equation, a single formula that can derive every other equation, starting from the big bang to the end of the universe. A master formula like a master key can open every lock same as that a master formula. It will be a science’s crowning achievement if such a formula truly comes into existence.

Listen to The God Equation by Dr. Michio Kaku Audio Summary on YouTube:

In this book, Dr. Michio Kaku explained Einstien’s Dream. How Einstien wants to create a one-inch-long equation that would allow him to, in his words, “Read the mind of the God.” Einstein calls it “The Unified Field Theory.” What could be so hard in the equation that even Einstein could not solve it?
Each time scientists have discovered a new force or an equation, and it has changed civilization’s course and altered humankind’s destiny.

There are four forces of nature:

By unifying all these four forces, scientists may bring all these theories into one single theory that may ultimately answer some of the deepest mysteries and questions in all of science.

This book is about the journey to find this ultimate theory and all the fantastic twists and turns of what is unquestionably one of the most vital chapters in the history of physics. You will come to know about how this theory may also unravel the deepest mysteries of space and time.

In The God Equation: In the quest for a theory of everything, Dr. Michio Kaku writes how scientists still do not have any solid evidence on how this world was created?

Through many experiments and researching string theory, scientists are able to find the Higgs Boson, also known as the God Particle. Outside Geneva, Switzerland, the hugest particle accelerator in history, called the Large Hadron Collider (LHC), was able to find the Higgs Boson (The Gods Particle). Still, this particle was only a tiny missing piece of the final theory. There is no guarantee that these costly machines will find anything at all. No one knows that for what energy we will discover new subatomic particles that could verify the theory.

Dr. Michio Kaku admits he has been working on string theory since 1968, and ever since, it has shown remarkable progress. It started from a single equation, and now it can fill a library with its research papers.

String theory says that there should be a multiverse of the universe so, why are we habiting in this universe and not in another?

In the book, The God Equation: The Quest for a Theory of Everything.

Dr. Michio Kaku had questioned many theories that we tend to believe. Still, there is no solid evidence on this, like the Greek Philosopher Aristotle, better known as The Father of Biology. Aristotle was also called the Father of Western Logic, and he believed that everything could be reduced to a mixture of four fundamental ingredients: Earth, Air, Fire, and Water. But Dr. Michio Kaku questions how these four elements could give rise to the world’s rich complexity? Many such questions are asked in this book, The God Equation: The quest for a theory of everything.

Dr. Michio Kaku says Newton’s theory of motion and gravitation stands as one of humankind’s most outstanding achievements. Even today, Newton’s laws allow NASA engineers to guide our space probes across the solar system.

Suggestion (must read): The God Delusion By Richard Dawkins

Now the answer to the question: Why is life possible on Earth?
The answer to this is because we have an external source of energy, the Sun. So, sunlight makes evolution to higher forms possible. In the same method, it is conceivable to use wormholes to open a gateway to the universe.

Why do scientists fail to find the perfect equation?

The Conclusion on The God Equation: The Quest for a Theory of Everything

This journey of searching for the theory of everything has led scientists to find the ultimate unifying symmetry of the universe.
We are like two-dimensional creatures living on flat land and unable to visualize the third-dimensional.

Once there was a beautiful three-dimensional crystal that suddenly, for some reason, broke into million pieces and buried into the flat land. After many centuries, humans found those pieces, and over time, they were able to assemble them into two gigantic pieces. One part was called Gravity, and the other part was called Quantum Theory. And it seems that humans could never fit these two pieces together.
One day, a person came forward and said, using mathematics, to lift one piece into an imaginary third dimension to fit together.