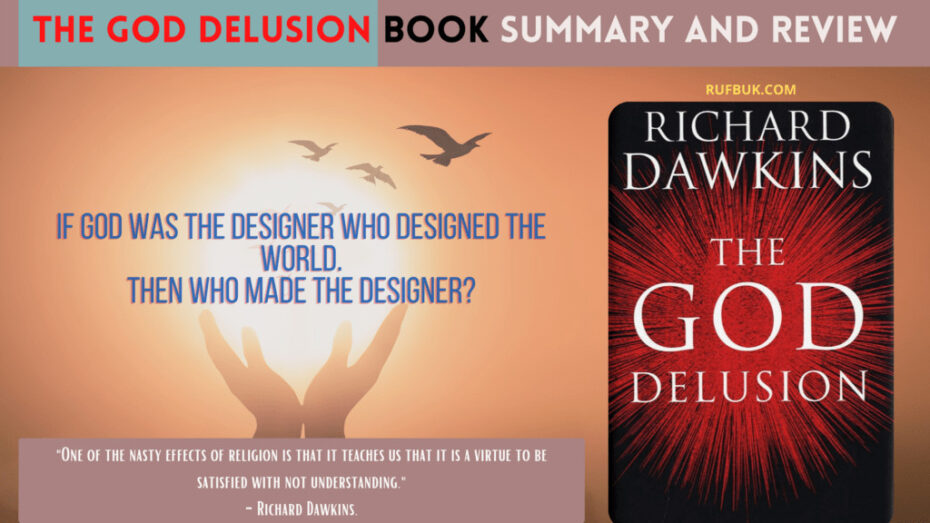 The God Delusion questions the idea of God. Is there any argument for believing that God is real and he had created this entire universe? Well, Richard Dawkins gave a factual statement that there is no point that someone could have made this giant universe. Because if this is true, then who had created the creator. Richard Dawkins argues on the fact that this is the most straightforward theory humankind could think of, and they are a fool to think so.

Richard has explained in detail how a galaxy could have been created and lives have existed using the scientific approach. He tried to break the orthodox thinking of people and give them a reasonable and more accurate argument on how the world was created.

Suggestion (must read): The God Equation By Dr. Michio Kaku

You can be religious. You can be an atheist. It depends upon personal preferences. If you live in a democracy, you know your constitution gives you these rights. But blaming one another is not a good practice at all. You may be an atheist, but you don’t have any right to disrespect the person who believes in religion, although it is a hierarchy. Some people seek immense satisfaction by practicing religion.

Before reading the summary of the book, keep your religious sentiments away for a while and look at the logical aspects that author Richard Dawkins has tried to depict through his beautiful piece of art names “The God Delusion.“

This book aims to attack all faiths, all religions, and all agnostics. It is hard to be an atheist in this world today but despite the number of an atheist multiplying. An atheist believes in humor, science, and logic. They think that religious people are stupid, and they only believe in faith because their parents and everyone around them believe.

“One of the nasty effects of religion is that it teaches us that it is a virtue to be satisfied with not understanding.”
-Richard Dawkins.

He argues on a fact that: “It is said that God designed the world. He creates the world. He created humans, animals, all living and non-living beings.”
To this statement, an atheist could reply: Evolution is the opposite of chance. Because what you are saying if is true, then who created the designer and the designer designed the world because it is a fact that “energy can never be created, nor be destroyed.”

Accumulation breaks down the big picture into smaller and logical steps. Richard Dawkins gives the illustration of a mountain.

Now, there is a cliff that is impossible to climb from the side of route 1. But there is another easy side incline and easy to climb the mountain and reach the cliff. What evolution did is it leaves the route, i.e., the most complicated route, and chooses the easiest path to climb.
Evolution shows the power of gradual degrees. But today, it will take one time for someone to prove that a complex organ could not have evolved through gradual degrees over many years. Today many theories contradict the theory of evolution. Darwin said that the idea of evolution is a prediction no one has ever given proof of.

So the biggest question: Where did everything come from?

Richard Dawkins says that we don’t have a perfect answer for this question, but that does not mean we should stop researching. Richard Dawkins, in his book The God Delusion, has proposed three theories.

There are many universes like a bubble of foam. These bubbles exist alongside and create one Megaverse. This Megaverse has scientific law of its own.

The second theory of Richard Dawkins says that our universe may keep expanding forever, or it may remain constant or may collapse itself. But this may be a 20 billion year process.

The third theory of Richard Dawkins says that a daughter universe is born through black holes from a parent universe. This theory follows natural selection, where only universes that have what it takes will survive.

Richard Dawkins says that these three theories are more probable and simpler to agree with than any theory with a God.

Although these three theories are also predictions and lack evidence, proving God’s existence with facts is way more complicated.

What does Richard Dawkins believe?

Is it necessary to read the instructions and preface of the book The God Delusion?

No, it’s not necessary to read the Instruction and Preface of the book The God Delusion. But it is suggested to read. This will give you the perspective to see the book from Author’s perspective.