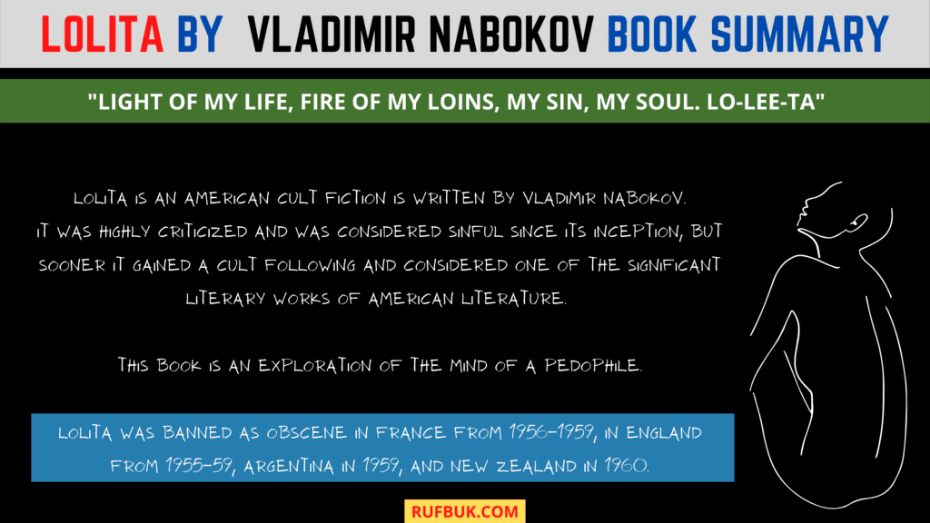 Suggestion (must read): The God Equation By Dr. Michio Kaku

“Fear and Sex are the greatest transmuting force on the planet while one is exploiting humans
while the other is reproducing the one.”

This book revolves around the main protagonist, Humbert. Humbert happens to be a pedophile who written a manuscript about his life. John Ray later finds it and reads through the script and finds when Humbert was stepping into his teens. He found his love in a 12-year girl named Annabelle. They both tried to have intimate contact in the hotel in which both of their families resided. Finally, one day they were busy spending time with each other, feeling the essence of one another. Later the hotel staff caught both of them. Annabelle’s parents decided to separate her from Humbert. They departed from the hotel. Annabelle’s absence made Humbert somber.

Time slipped down. Humbert grew younger and bolder. One day he found news of Annabelle being dead. This news had baffled and startled him. The void of Anabelle in his life turned him into a voluptuous maniac. A pedophile searched for prostitutes aged between 12-14 years because they had a charm and temptation, which Humbert was looking for.

After many searches to control and manifest his lust, he ended up marrying his doctor’s daughter Valeria, who was 16 years old, but after four years, she grew 20, and a charm and sheen were lost. The girl soon ran with a Russian taxi driver. Humbert was sad but more than sorry he was amused because now he was free to hit someone else.

Now Humbert moved to New England and started to live with Mr. Macboose. He had a daughter of minor age as Humbert wanted, but Mr. Macboose’s house went on fire, and he couldn’t stay with them. He then moved to Mrs. Charlotte’s house and started living on rent. Mrs. Charlotte had a beautiful little daughter. Her name was Dolorous but was fondly called by the nickname Lolita. She was 12 years old. When Humbert looked at Lolita, he was astonished. He thought Anabelle was reborn as Lolita.

Humbert had grown lunatic in the lust of Lolita. He would coax her and seduce her. Humbert used to slip his hands-on Lolita’s thighs, enjoying her delicate skin. He would run his hands over his bosoms, enjoying the early flesh of teenagers. Humbert’s intention had grown wild. Humbert married Mrs. Charlotte to stay close with Lolita, but sooner Charlotte sent Lolita to a summer camp to spend time with Humbert.

Humbert used to write about all his experiences with Lolita in his diary. It was full of obscenity, abruptly. Mrs.Charlotte found it and started screaming, Monster! Monster! She ran on the streets and met with an accident. Humbert took advantage of the moment and called Lolita back. He then took Lolita to the highway hotel, where he gave Lolita sleeping pills and tried to rape her. Lolita gained back consciousness, and they had consensual intimacy.

Humbert introduced the fire in his loins into Lolita’s body. They kissed, hugged, and the pious bond of a dad and daughter turned sinful. Today Humbert was contented. For the next two years, they kept roaming. They had copulated nearly in every hotel of New England. They had performed intimacy in the jungle, where the rattling dry leaves fell on the ground, so was Lolita’s moan, her pain in enjoyment. She got accustomed to sooner they were caught up by two cops, but Lolita didn’t say a word.

Lolita now used Humbert; she knew she was his greatest weakness. Lolita would ask for commodities and attires in return for copulation. Later she was admitted into a girls school, but Humbert always feared Lolita disclosing about her relationship. He dislikes and felt jealous and frustrated when Lolita would chat with other boys. A few days later, Lolita was sick. Humbert took her to the hospital. Humbert noticed his car is being followed by a red car. Lolita was sooner discharged and moved away with a stranger.

Who was the stranger? Where is Lolita? Will Humbert will be able to meet Lolita? To Know, read the most acclaimed and banned book, Lolita.

Who should read this book?

Although this book has a deeper meaning and is full of obscene content, this book has the deepest wild desires of people suffering from a pedophile. Lolita book is for a public who is young yet mature. Teenagers could misunderstand this book, but they can look into the book as teaching of limitations in a relationship, the dignity one should keep in a relationship. Overall this book is a beautiful piece of art. Lolita has a rich use of literature.

Why should you read the book?

The overall oneliner seizing the content could be” Lusted or Busted.” This book considers a pedophile’s brain how sex drives a person’s emotions making life decisions. A brain’s fantasy is appreciated until it becomes fanatic. This book explores the lure of human nature, which is bounded to fear and gain. Lolita feared she would be an orphan if Humbert abdicated her but on the other hand, instead of rebuff and detention, she took advantage of getting her accessories.

Why Vladimir Nabokov tried to burn the book lolita?

Lolita was written in the English language. It was first published in Paris in the year 1955 by the Olympia Press. Later, It was translated into Russian by Nabokov. After its first print, 5000 copies sold out in no time.

Is lolita a real story or fiction?

Vladimir Nabokov had clearly stated that this book is complete fiction. But few rumours say this is a real story. Vladimir Nabokov is actually Humbert, i.e., the main protagonist of the book Lolita. And few anecdotes claim that this story is a depiction of Vladimir’s mind. He somewhere wants to live that life, and he penned down his imagination to his book Lolita.

Why was the lolita book so controversial?

This book considers a pedophile’s brain how sex drives a person’s emotions making life decisions. A brain’s fantasy is appreciated until it becomes fanatic. This book explores the lure of human nature, which is bounded to fear and gain. Lolita feared she would be an orphan if Humbert abdicated her but on the other hand, instead of rebuff and detention, she took advantage of getting her accessories.

What makes the book Lolita a classic, despite such a disturbing subject matter?

Time. During the later years, society found Lolita as an understanding of the complex brain of a pedophile and how sex and greed had actually been ruling humankind as people became advance and now when intimacy is not treated as a taboo. People understood the real meaning of the book. And this makes the book Lolita a classic, despite such a disturbing subject matter.

Sourav Sarkar is an author and litterateur information who had indited the book “The sadist” which is a work of fiction available on Amazon.com and is currently penning the book outdoes: “The New Synonym of Life” which is presumedly going to be one of its kind. Sourav had diversified his article writing proficiency featuring from financial literacy to social-technical skills and issues.   He is also working as a content creator on the YouTube channel Sarkar Sarcasm.

He is also a dexterous speaker and debater who had attended many public discussion forums. He likes to spend a lot of time amidst nature and is a promenade lover.